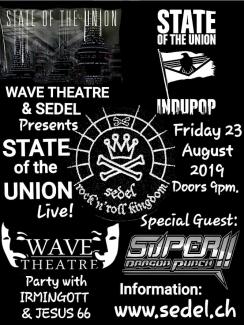 State of the Union, electro band based in Los Angeles, California. It emerges as a powerhouse in the alternative/electronic/industrial scene. Their unique blend of industrial dance and more accesible forms of EBM with contemporary electronic styles and very deep, thoughtful,inspiring lyrics ranging from hard-hitting electronic beats to haunting ballads and symphonic orchestrations. State of the Union has earned incredible acclaim for their energetic live performances and gained a fanatical worldwide following. State of the Union is one of the brightest bands to explode onto the scene in quite some time. Johann Sebastian, the singer and architect behind this multidimensional project continues to leap from strength to strength with his follow-up album "Evol Love Industry" to be release in North America, Europe and rest of the world at the beginning of 2008.

State Of The Union's name itself is an expression of Johann's outlooks, enveloping political overtones at the same time still resembling the rage and emotion that he was initially trying to portray in his music. They felt it was only fitting to follow their own aspirations in pursue of their own musical scope. Their debut effort Black City Lights inspired by the loyalist to the EBM and Darkwave scene, fuses together expressions and elements of philosophy, politics, love and symbolism through the medium of hard hitting and addictive dance music.