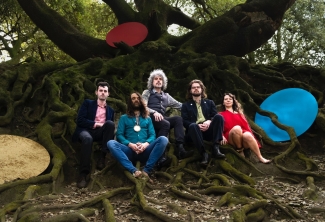 TAU are a revolving door collective led by Shaun Mulrooney, an Irish born and Berlin-based musician. His fellow sonic travellers are Earl Harvin, drummer with Tindersticks, a renowned Afrofuturist legend, Idris Ackamoor of The Pyramids, and modern Indian classical music pioneers, Lalitha and Nandini, aka the LN Sisters.

"hubris." is a Swiss post-rock band originating from Fribourg. Formed in 2014, the instrumental quartet is characterised by their original style which blends an experimental touch of post-rock, electronica atmosphere and some elements of the progressive and metal scene