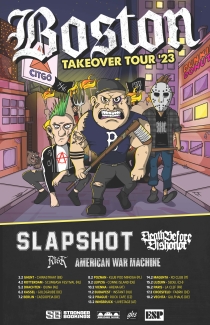 Slapshot was formed in 1985 by Steve Risteen and Mark McKay, formerly of Terminally Ill; Jack „Choke“ Kelly, formerly of Negative FX and Last Rights; and Jonathan Anastas, formerly of Decadence and DYS. Due to the reputations of its members, the band had a relatively high profile even before its debut!