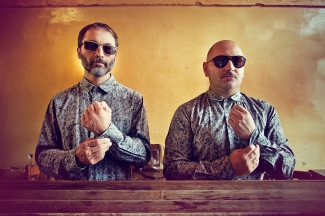 Founded by Raed Yassin and Paed Conca in 2006, “Praed” is a band whose musical oeuvre can be described as a mixture of Arabic popular music, free jazz, and electronics. In the same year, the band made its first public appearance in Al Maslakh festival in Switzerland, immediately followed by a concert at the Irtijal festival in Beirut. Since then, the band has frequented numerous international music festivals and toured intensively world-wide, spanning Japan, Europe and Canada. Through these endeavors, the band has created a large global network with other renowned musicians as musical collaborators.
The band consists of two regular members: Raed Yassin playing keyboards, laptop, electronics and vocals; and Paed Conca on clarinet, electric bass and electronics.
Supported by SüdKulturFonds