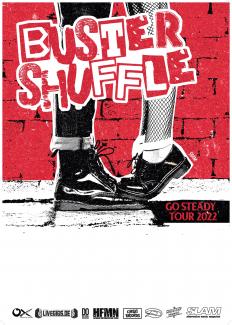 Music is supposed to be about having fun and it’s practically impossible not to have a good time when listening to Buster Shuffle.

Buster Shuffle teamed up with Art Brut’s Ian Catskilkin to produce 2010 debut album ‘Our Night Out’, which esteemed British music magazine, Uncut, gave four out of five stars. It went on to win a number of high-profile fans in the process, including BBC radio giant, Steve Lamacq and Pixies legend Frank Black.

The band went on the road around the UK and supports with Madness, The Blockheads, The Selecter, The Wombats and The Beat along with sold out in-store Fred Perry subculture gigs enhanced the band’s burgeoning reputation.