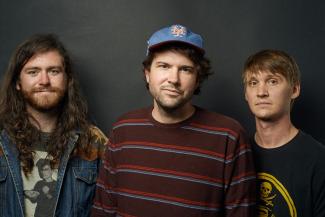 Wild Pink are one of those wonderfully rare bands that sounds instantly familiar upon first listen. Yet trying to draw parallels to their influences or similar bands proves to be incredibly difficult. That remains the same as Wild Pink continue to chart their own unique course. These new songs move at their own intentional pace while the band fleshes their arrangements out further. Yet the songs never suffer, only growing more dynamic and more propulsive with this increased nuance. Wild Pink doesn't lose the warm intimacy that made the band special, it's only enhanced to a greater degree here. These are deeply personal songs about freedom, or lack thereof, about growing up and leaving your youth behind yet still clinging to those sacred scars that we hold dear. Often exercising a stream of conscious lyrical style, Wild Pink has a remarkable way of transporting you to those moments in time where the smallest detail remains etched into your being. There is a sincerity that echoes throughout these songs that is intoxicating and speaks to what makes the band so special. Wild Pink choose the road less traveled and it has served them well.

Steiner and Sagan felt the impulse to make music together from the get-go – they first met as university students, quickly put out an EP together, and started performing as an acoustic two-piece in dorm rooms and backyards. During the next few years, the friends traveled separately, eventually reunited, and recorded what would become the first Ratboys record, AOID, which the folks at GoldFlakePaint describe as ‘a gleaming, joyous, raucous display of melodic indie-rock.’
After a year and a half of touring the US and Europe as a plugged-in full band (featuring the additions of drums, bass, and trumpet), the members of Ratboys returned to Chicago and holed up at Atlas Studios for two weeks to record with engineer Mikey Crotty (who had previously worked with the group on the songs 'Not Again' and 'Light Pollution'). ‘This time around, we were lucky enough to feature the talents of friends who play the pedal steel, accordion, cello and violin to give the songs an extra something,’ says Steiner. ‘Dave finally got to show off his ridiculous skills on the pocket piano, and the whole thing felt like one big loving experiment.’