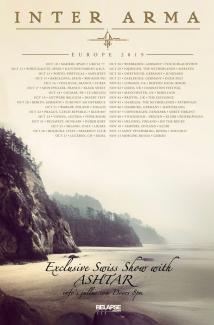 INTER ARMA‘s music resists generalization and categorization, but if there’s one thing that’s consistently true, it’s that the VA quintet possesses an unparalleled sense of scope. Few artists today accurately convey the complexity that INTER ARMA (Latin for “in times of war”) does – the band creates terrible and often hauntingly beautiful portraits of humanity through music that is deeply organic yet still mystical and modern. INTER ARMA are just as committed to the live circuit as they are to their records: the band has performed extensively throughout Europe and the US, sharing the stage with the likes of Kylesa, Baroness, Cough, Royal Thunder, Black Tusk, Ulcerate, Russian Circles, Windhand, and dozens of others. INTER ARMA‘s raw, uninhibited approach merges doom metal, psychedelic sludge, black metal, prog and more, and over the course of the last ten years, has established the band as a uniquely innovative force in contemporary extreme metal.