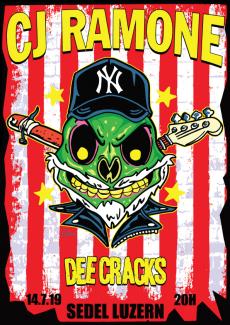 Out of the seven billion or so people on the planet, only seven men have been lucky enough to be gifted with the Ramone surname. As of 2017, four have already headed off to that great gig in the sky. Thankfully, CJ Ramone has no plans to leave any time soon. He expertly stepped in for Dee Dee in 1989 and played with the legendary punk quartet until their 1996 breakup. He sang lead on “Strength To Endure”; he wrote two tracks for the band’s farewell album, ¡Adios Amigos!; he was onstage for their epic final show, delivering those iconic “1-2-3-4!” shouts and rubbing shoulders onstage with Eddie Vedder, Tim Armstrong and Lemmy. CJ Ramone is as important a part of punk rock history as anyone else you can think of, and the best part is he’s just getting started. “When you’re in the Ramones family, you’re a Ramone for life,” CJ says. “Richie Ramone still has it; Marky Ramone still has it; hell, Johnny Ramone’s wife changed her last name to Ramone. I absolutely feel obliged to keep the legacy going. I 100 percent do. I feel it. I don’t sit down and try to write Ramones songs, but I was a huge fan since I was a kid. I played in the band for seven years. I’m undeniably influenced hugely by them. I’ve heard people say what I do sounds like the Ramones. Of course it does! How could it not?”